FROM A TO ZANY: TROUPE BREAKS COMPLEX TOPICS DOWN INTO KID-FRIENDLY LESSONS 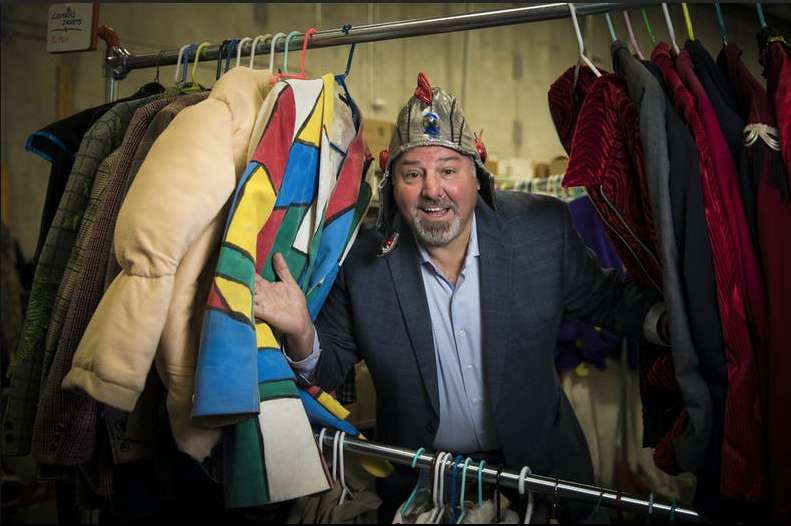 Ward Eames, president and founder of the National Theatre for Children,
started the troupe in his apartment. It now has offices in Golden Valley.

Captain Doorknob, a flamboyant pirate with a knob for a hand and a smug lilt in his voice, can perk up young ears in a way that a roomful of buttoned-up scientists and suits never could.

That’s why Fortune 500 company Duke Energy, based in North Carolina, deployed the zany character created at the National Theatre for Children (NTC) in Minneapolis to talk about energy conservation at thousands of elementary schools across the southeastern United States.

Captain Doorknob is one of hundreds of fanciful characters generated by NTC. Founded in 1978 by then-University of Minnesota student Ward Eames, the theater company and its associated nonprofit NTC Research Foundation performed in front of 827,000 students at more than 2,400 schools across the country last year.

“We make a very complicated subject simple and emotional,” said Eames, now NTC’s president. “Kids are ready to take off. All you have to do is light the fuse.”

NTC works with companies and government agencies looking to use their philanthropic dollars to deliver a free educational or safety message to schoolchildren. The Minneapolis-based nonprofit is the creative middleman connecting companies, schools and perhaps their toughest customers: children.

NTC now hopes that a new collaboration with FIRST Lego League Junior will create some buzz around what it calls STEAM — science, technology, engineering, arts and math.

Duke Energy started working with NTC in 2011 to teach core educational concepts about how students can use energy wisely and why they should.

The partnership flourished. This school year, Duke is sponsoring 1,500 performances for kindergartners through eighth-graders. 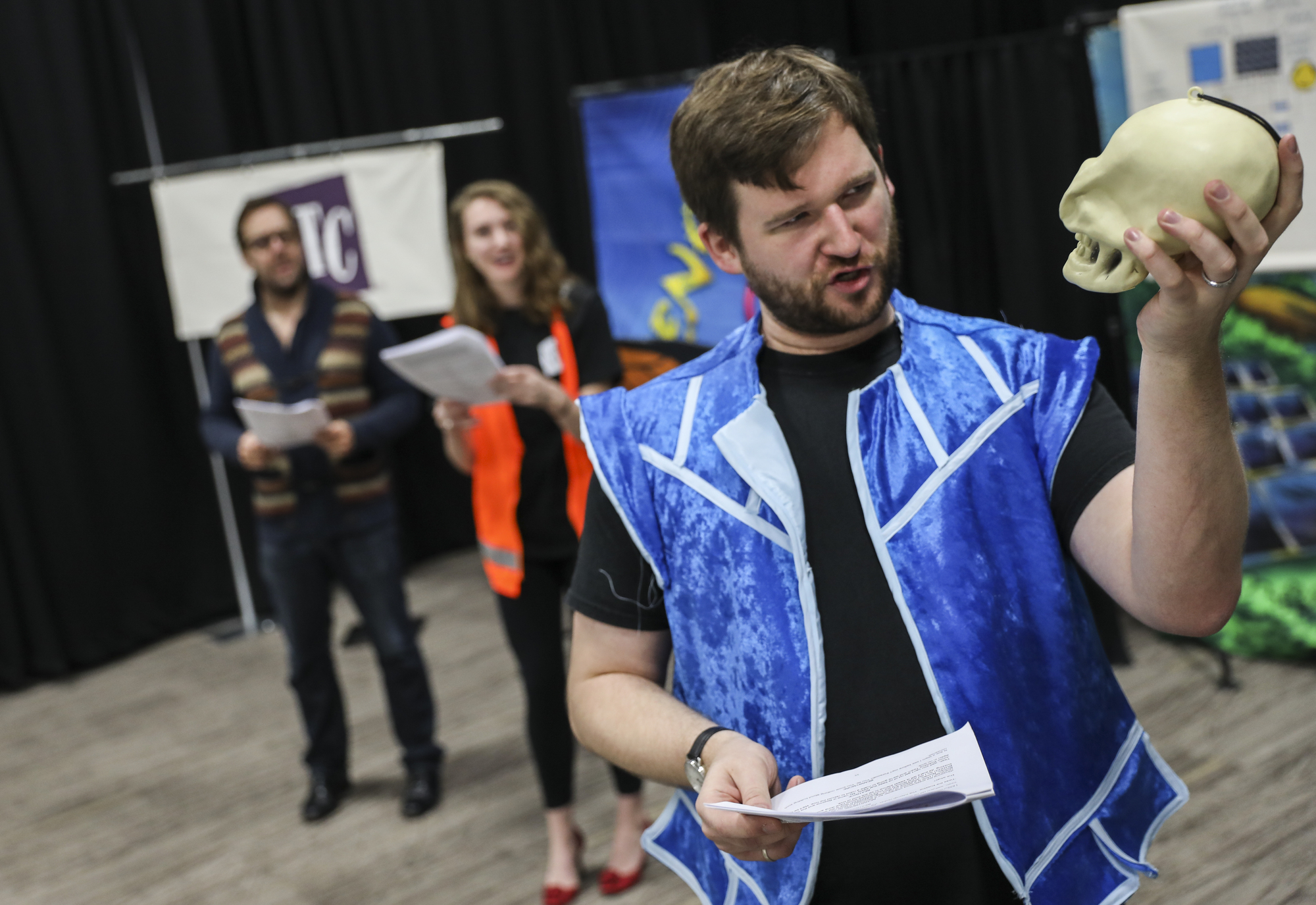 Left to right, director Jon Mikkelsen and actors Lindy Jackson
and Joe Heaney did a walk-through of “Bee on the Team.”

“Through the program, students learn about using energy wisely through a backdrop of fun and engaging characters in an educational comedy featuring improvisational sketches,” said Duke spokeswoman Meghan Miles.

In 38 years, NTC also has developed an enthusiastic following among schools and teachers.

“Every time they contact us, people in our building are excited to have them back,” said Linsey Owen, who oversees the theater department at Roseville Middle School.

“The company does a really good job of knowing their target audience, getting students involved and having students participate. They seem to get the middle-school psyche.”

Eames, who started the company in his apartment, initially handled the writing, acting and bookings. He now relies on a staff of 200 professional actors, writers, artists, web designers, curriculum experts and logistics people who work out of NTC’s 20,000-square-foot headquarters in Golden Valley.

On a recent morning, actors walked through a performance of “Bee on the Team.” Actress Lindy Jackson, in red heels and a whimsical pair of wings, and actor Joe Heaney, holding a skull, ran through their lines.

The scene riffs on Shakespeare’s Hamlet, a fact probably lost on most of the kids who will see it, Eames said, but it amuses many of the adults in the room. 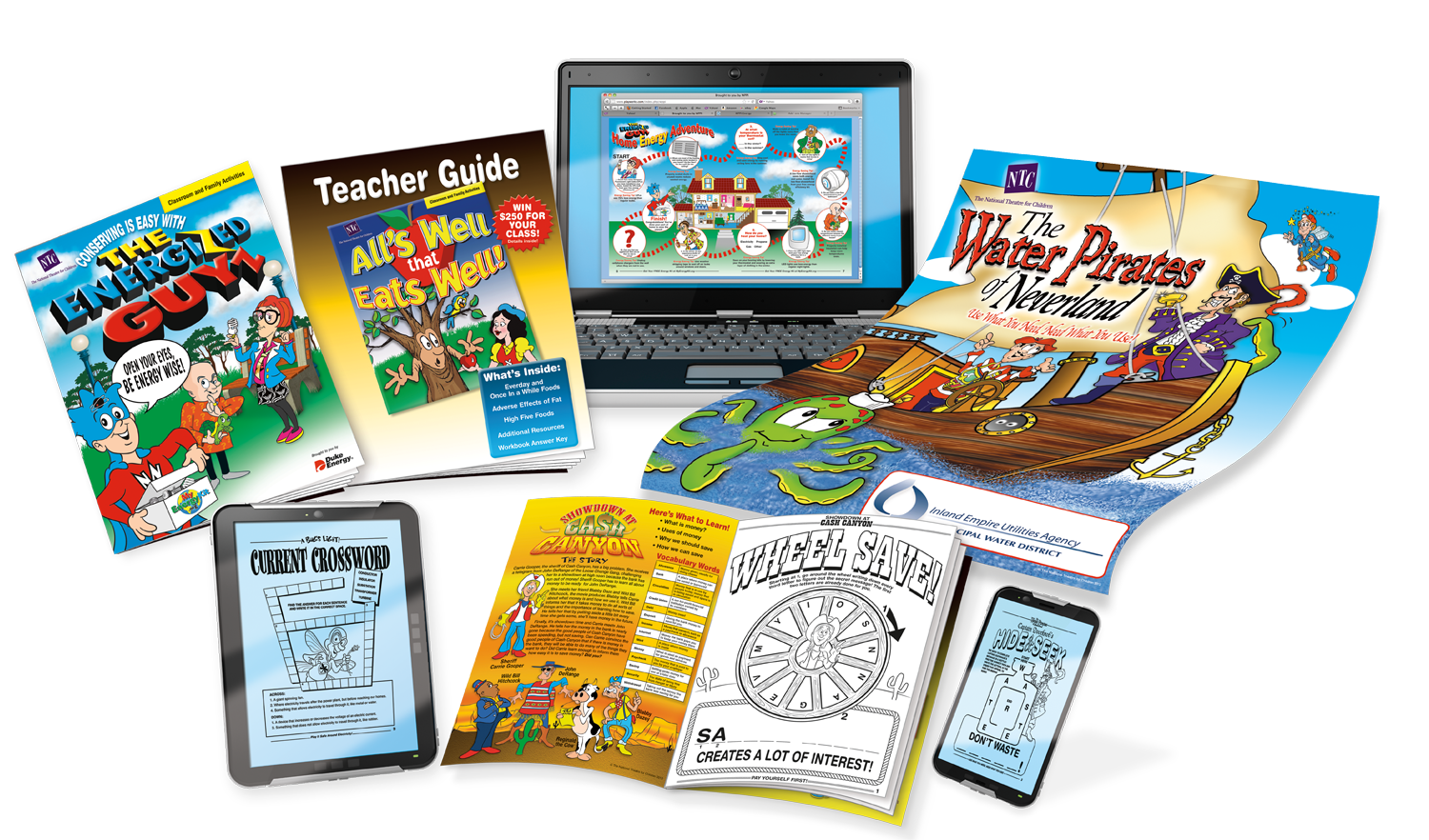 The group combines its performances with illustrated guides,
online games and other tools.

“The kids just see it as a bear talking to a skull. There is an extra level [of interest] for the teachers,” Eames said.

Performances deal with such themes as health, financial literacy, safety and science. NTC blends them with current curriculum standards so that teachers and principals are willing to devote precious class time.

On the production side, NTC helps companies craft their message and makes sure companies maintain their philanthropic or educational focus and steer clear of overt sales pitches.

NTC’s access to schools depends on it. Eames said he’s turned away potential partners who wanted to use their primary pitchman in plays or asked to tinker with messages. “We do have to say no at times,” he said.

The hardest sell, though, is always the kids.

A team of NTC writers and artists infuses the 25- to 40-minute live performances with quips, gags, audience participation and memorable characters like villains Polly Lution — the enemy of clean water — and the Slug, who shrugs off a healthy lifestyle.

Derek Meyer joined NTC in 2008 as part of a two-person traveling acting team.

“It’s a lot of fun. Your job is to make kids laugh — that’s your responsibility,” said Meyer, who has since moved to an NTC office job.

NTC credits its growth to rigorous performance evaluations that measure student retention and whether the play stimulated classroom discussion.

“We have measurable data. You can actually prove you are teaching,” Eames said.

NTC also pairs performances with colorful guides for teachers and students, online games and other tools. The idea is to make it easy for teachers to incorporate the plays into their lessons.

Principal Ginger Vance at Notre Dame Academy in Minnetonka, where NTC has performed for the past two years, said the group clears a high bar to gain access to the school’s students.

“You really have to make certain it will have the curriculum connections,” Vance said. “They come in and really help to teach those science concepts and conservation pieces. They really do a terrific job of breaking down concepts to the level of the learners but making it fun and creative.”

FROM A TO ZANY: TROUPE BREAKS COMPLEX TOPICS DOWN INTO KID-FRIENDLY LESSONS

The School Channel: The Most Misunderstood (And Underutilized) Channel for Reaching Families